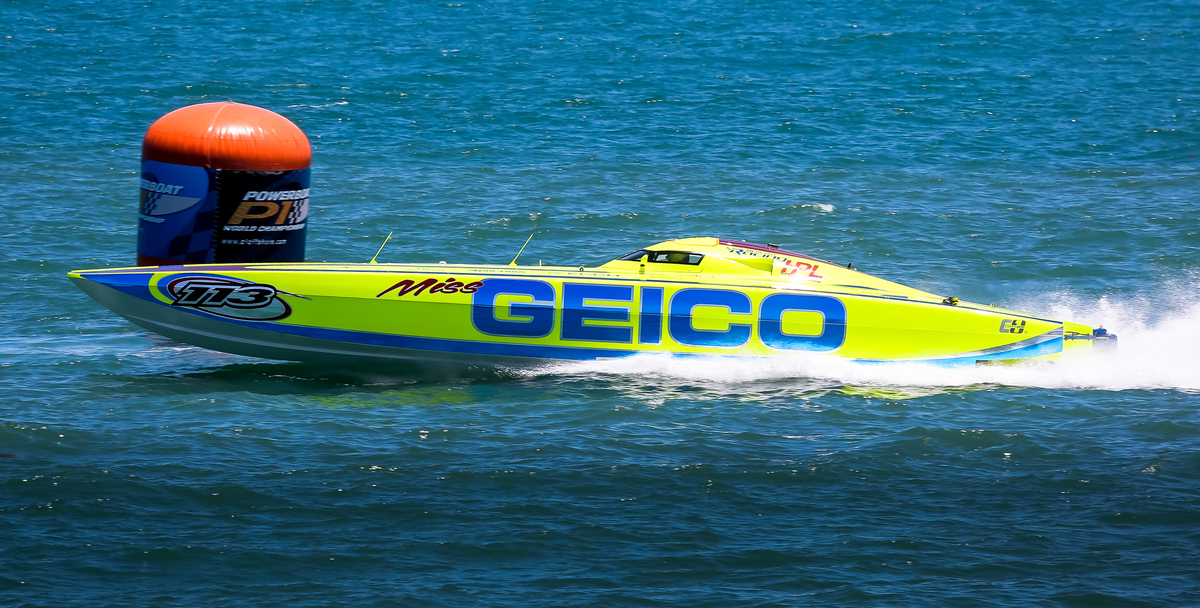 The Miss GEICO race boat will be ready in the time for the start of the 2020 APBA Offshore Championship Series. Photo courtesy/copyright Pete Boden.

Sustained in seconds, the damage to the 47-foot Miss GEICO catamaran during a roll-over in the 2019 Sarasota Powerboat Grand Prix—the third contest of the inaugural six-race American Power Boat Association Offshore Grand Prix Series—has translated to months of ongoing repair work for the crew at its Riviera Beach, Fla., headquarters. But with the new deck of the boat scheduled to be bonded to its also-repaired hull, team manager Gary Stray said the restoration project is on a schedule and the boat will ready for the 2020 APBA series-opener in Cocoa Beach, Fla.

“We’ll be getting the deck on next week,” said Stray. “We’re putting in the roll bars for canopy reinforcement right now. We have built new panels for all our data acquisition and telemetry instruments. Next week, the deck will be married to the hull and then we’ll start rigging.
“We are ahead of the game with our rigging efforts,” he continued. “We have all the parts we’ll need such as wiring harnesses all prepped, ready to go and sitting on a shelf.”

Though the Sarasota incident effectively ended the Miss GEICO team’s run for a Class ONE championship, it did afford Stray and company to make improvements to their Victory-built catamaran during the repair process. Stray said they have simplified everything in the cockpit, reduced weight and worked on “aerodynamic" enhancements.

Damage the catamaran sustained during its 2019 rollover in Sarasota, Fla., was significant.

The team owns four Mercury Racing 1100 Comp engines. The backup set went into the former Zabo race boat, another Victory cat, that the Miss GEICO team leased for the final three races of the season. The team returned the engines in the boat that rolled to the Fond du Lac, Wis., builder, where they were torn and rebuilt.

The refreshed engines are going into the repaired Miss GEICO boat. For now at least, the plan is to leave the backup pair in the Zabo race boat, which may compete in the Class ONE ranks this season.

“Just as they leased their boat to us, we hope to lease our engines to them so they can compete this season,” said Stray.

Check out the slideshow above for a look at the current start of the Miss GEICO repair project.

Following the Sarasota rollover, Stray went to work on a long-term schedule for repairing the boat, as well as individual schedules for each team member responsible for his or her part of the project.

“We are within a day or two of the original schedule,” he said. “Everybody has been working really well together, and we’ve all been working some really long hours.”

If all stays on track, the team will be testing May 4-6 prior to the Cocoa Beach event two weeks later. New to the team this season, extreme sports superstar Travis Pastrana and veteran offshore racer Brit Lilly will get to spend time behind the wheel alongside Miss GEICO throttleman Steve Curtis, according to Stray. As previously reported on speedonthewater.com, Pastrana currently is slated to drive in four races, while Lilly will take the wheel for two events.
“I have no doubt that they will both take to it like ducks to water,” said Stray. “Brit drove the boat last year during testing, and Steve (Curtis) was very happy and felt very comfortable with him. Travis is an undeniably talented motorsports athlete. There will be a learning curve for both of them, of course, but I’m confident in both of them and excited for the season.”